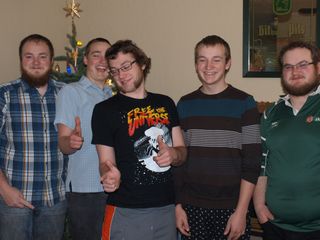 We went to the Pueblo Chili Fest this weekend. The smell of roasting chilis is awesome. Then off to the CSU Pueblo football game where the Thunderwolves stomped Ft. Lewis.
Enjoy the photos of Joe and Jillian, Chris and Max. 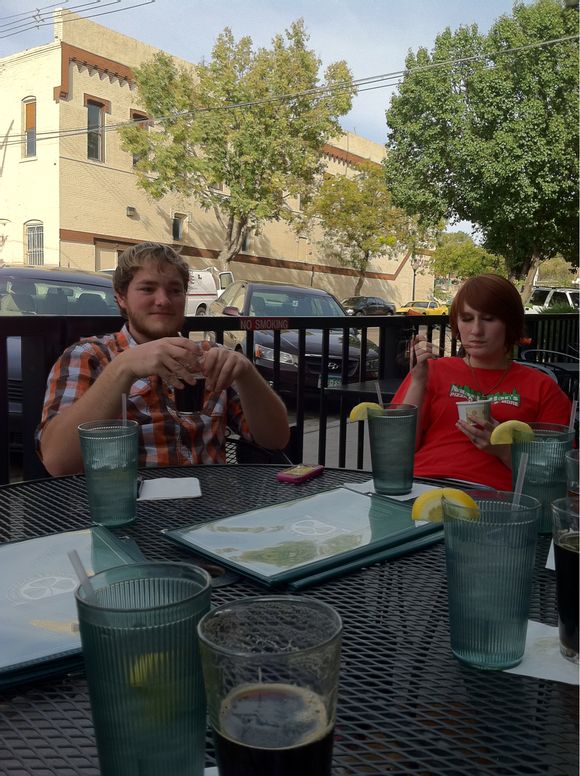 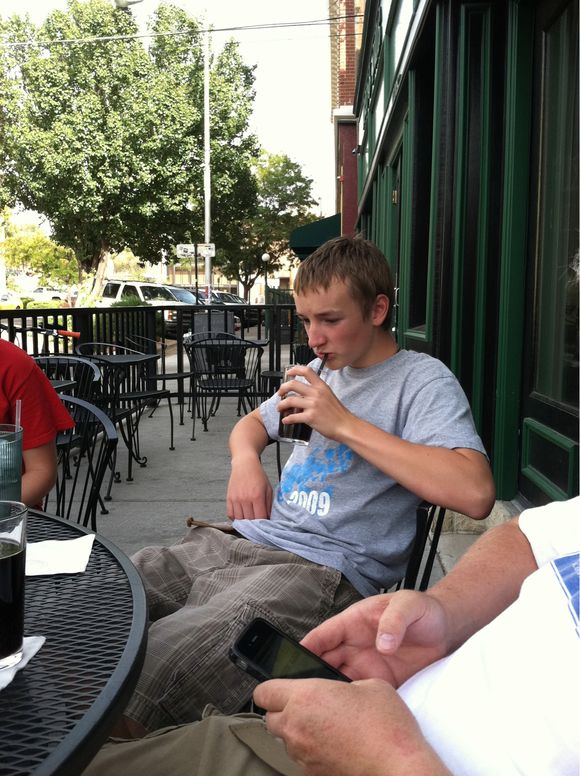 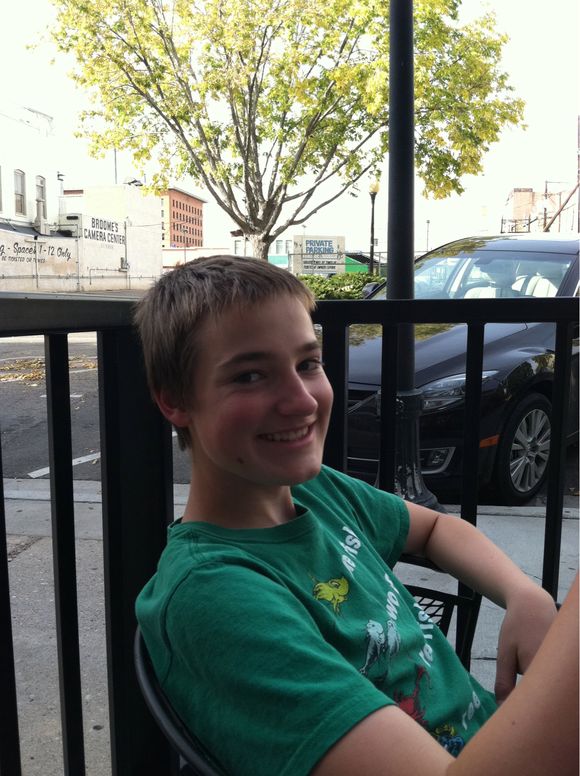 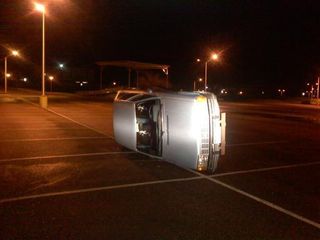 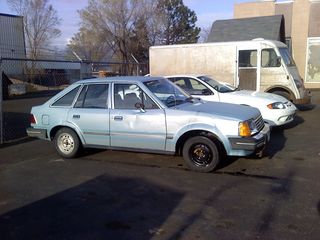 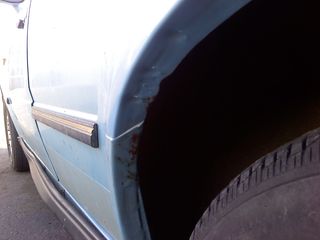 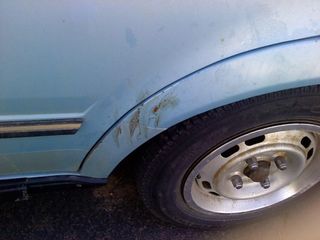 All in all, the little car rolls on.  Some one has a good cut on their hand from the fender well.

Man, I am getting old.  And my body tells me so.

I went to lunch with my Mom and Dad at Margarita at Pine Creek.  What a wonderful place and awesome food.  It was very enjoyable.

On a whim I decided to buy myself a birthday present.  I can dream can't I?  I stopped at the Ford dealer to see about a 4WD Explorer.  It sure was little parked next to the Expedition.  I decided I had better not buy that one.  But I did not give up dreaming.

I came home and called USAA about the cost of insurance and a loan. Talk about easy.  I was already preapproved. They talked me through finding what I wanted from their website. I could have purchased a car from their services right then and there.  The dealers will even deliver!

I did send for some information/pricing.  Who knows, maybe someone will offer me a great deal.

After all, it IS my Birthday.

because I get most of these.

A LICK AND A PROMISE

'I'll just give this a lick and a promise,' my mother said

any of the furniture.

'What is that supposed to mean,' I asked as in my young

mind I envisioned someone licking the floor with his or her

promise to come back and do the job right later.

that our mothers, grandmothers, and others used that they

probably heard from the generations before them. With the

passing of time, many old phrases become obsolete or even

disappear. This is unfortunate because some of them are

very appropriate and humorous. Here is a list of some of

1. A Bone to Pick (someone who wants to discuss a

2. An Axe to Grind (Someone who has a hidden motive)

This phrase is said to have originated from Benjamin

Franklin who told a story about a devious man who

asked how a grinding wheel worked. He ended up walking

away with his axe sharpened free of charge)

(one corrupt person can cause all the others to go

bad if you don't remove the bad one)

4. At sea (lost or not understanding something)

5. Bad Egg (Someone who was not a good person)

6. Barking at a knot (meaning that your efforts

were as useless as a dog barking at a knot.)

7. Barking up the wrong tree (talking about

something that was completely the wrong issue

with the wrong person

8. Bee in your bonnet (To have an idea that won't let

9. Been through the mill (had a rough time of it)

10. Between hay and grass (Not a child or an adult)

11. Blinky (Between sweet and sour as in milk)

13. Catawampus (Something that sits crooked such as

a piece of furniture sitting at an angle)

15. Feather in Your Cap (to accomplish a goal.

This came from years ago in wartime when warriors

might receive a feather they would put in their cap

for defeating an enemy)

20. Kit and caboodle (The whole thing)

22. Needs taken down a notch or two (like notches

in a belt usually a young person who thinks too

highly of himself and needs a lesson)

23. No Spring Chicken (Not young anymore)

25. Pert-near (short for pretty near)

26. Pretty is a s pretty does (your actions are

more important than your looks)

28. Scalawag (a rascal or unprincipled person)

29. Scarce as hen's teeth (something difficult to

30. Skedaddle (Get out of here quickly)

32. Straight From the Horse's Mouth

(privileged information from the one concerned)

(Not doing anything of value)

34. Sunday go to meetin' dress (The best dress you

35. We wash up real fine (is another goodie)

37. Too many irons in the fire (to be involved in too

38. Tuckered out (tired and all worn out)

39. Under the weather (not feeling well this term came

from going below deck on ships due to sea sickness

thus you go below or under the weather)

40. Wearing your 'best bib and tucker' (Being all

Well, if you hold your horses, I reckon

I'll get this whole kit and caboodle done and sent

off to you. Please don't be too persnickety and get

a bee in your bonnet because I've been pretty

tuckered out and at sea lately because I'm no spring

I haven't been just stringin' around and I know I'm not

the only duck in the pond, but I do have

too many irons in the fire. I might just be barking

at a knot, but I have tried to give this article

more than just a lick and a promise

If you need to kill lots of time...

There are lots of puzzles/games to play on this site.

I say I want a simpler, quiet life.  I think it is just a dream.  We stay so busy that I am not sure which way is up.  I am not the most organized person to have ever graced this world.  I am so bad it is a wonder that I get anything done.  I do leave lots undone or put off until another day.  I did vote.  That is done and now I can move on to other thoughts.  I still need to pray for who ever is our new leader and the advisers around them.
My sister from Florida is in town and I have had a chance to spend time with her and my parents.  Sunday we are going up to the mountains to spend the day at the cabin.  Kelly is coming from Denver to visit too.
The weather has been wonderful so it should be a nice day to go to the mountains.
Tim is still in Greenland.  It turned into a much longer trip than he expected.  He will make it home one of these days.  We are already thinking about our ski trip for this year.
Joe is waiting to hear from our government about his waiver for joining the Air Force.  He may still be here when it is time to go skiing.  Keep him in your prayers, please.
We spent Saturday at the church.  They had a High Mass and a procession with the kids dressed as Saints.  There were all kinds of games and activities set up for the families to enjoy.  The children that were dressed as Saints had the chance to give clues as to who they were and see if they could stump any of the judges.  A few of the kids were able to stump Father and they were pretty pleased with that.  We were there with 2 goats, 2 chickens and Betty.  We were the petting zoo activity.  There was even a little lawn tractor and wagon for the hay rides.
Some of the kids were afraid of the goats and chickens.  I was informed that one little girl only likes one legged chickens because they don't bite!  One little 2 yr old was kissing and hugging the goats and the dog.  I think if I had gotten the chickens out of the cage she would have hugged the chickens too.
I think the families had a very good time.  Many thanks to the people that did all the hard work to put that on.
Max won a cake at the cake walk.

Have a Blessed Day.

please think before you vote

when you use a blog format and are paying for it there should be a way to figure out how to use it.  I am beginning to think that I should give up on this whole blogging thing.

Please disregard my ignorance and click on the link.  Please think before you vote and encourage others to get out there and VOTE.  For every vote that is not for McCain, is one for Obama.  And he really scares me.