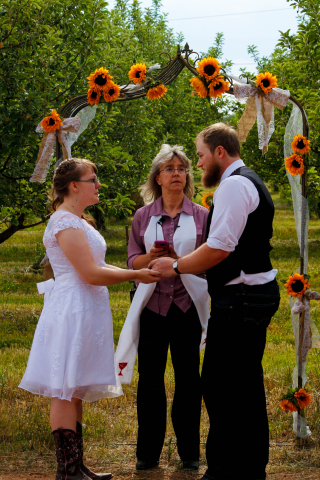 Goodness, I cannot believe that I never shared this.  I gained a daughter this summer!  It was beautiful to witness these two joining together in marriage. 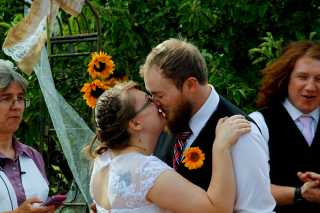 Last week was a very busy/stressful week.  It was a good week in that Zach was home for a few days and we were a part of Jimmy and Gretchen's wedding.  I had some of the boys for a couple nights and the Harris' had the girls.  Considering Jimmy is one of 7 boys, I know that had to be a little different for our friends.  I had the boys, I just had to have enough food.  I enjoyed the slight fuss of the young men.

The fire is 55% contained as of early this morning.  Most of the people evacuated have been allowed to return home.  I do know of a few people that went home and then returned to the hotel because the smoke smell was over powering.

For us out here, it was not too bad.  A few days of nasty smoke but nothing like in town.  I went into hiding and did not go into town, so my lungs did okay.

Betty looks like the frankenstien of dogs but she will be okay.  It is hard to make a border collie stay still.  She wants to go down in the field and do her job but for now she is banished to the back bedroom.  She seems to think we are killing her by putting a leash and collar on her but she is supposed to be "quiet".  We have to let her off the leash to get her to do her business.

Thank you all for your thoughts and prayers during the fire.  We are all doing fine.  My mom is good.  Keep the families that lost hteir homes in your prayers.  346 homes were lost.  One couple that stayed in their home was lost in the fire.  Over 17000 acres burned.  Lots of hard work by our firefighters!

Have a Grace Day.

I pray that it rains a good, days long, German style rain. We need rain.

One of the "boys" has made a new beginning. James has been around us for a few years. He and his family are family to us. Now we have added a "girl" to the mix.
It is a great addition and i ask for God's blessing foe their new journey together.
Welcome Gretchen! 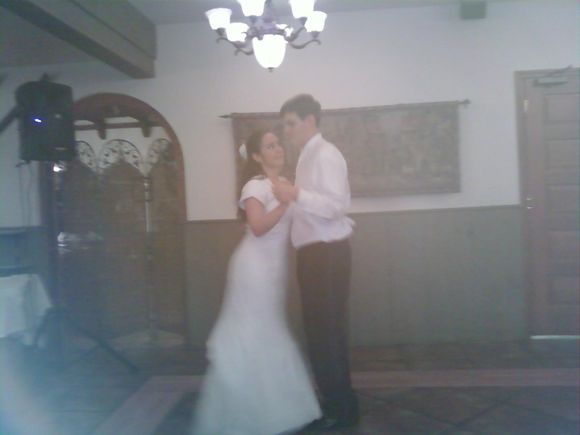 Max is 15. Grandma had a birthday too! We had a feast. Sushi and other goodies. It is so great to be able to celebrate another year of life. And to say Thanks! 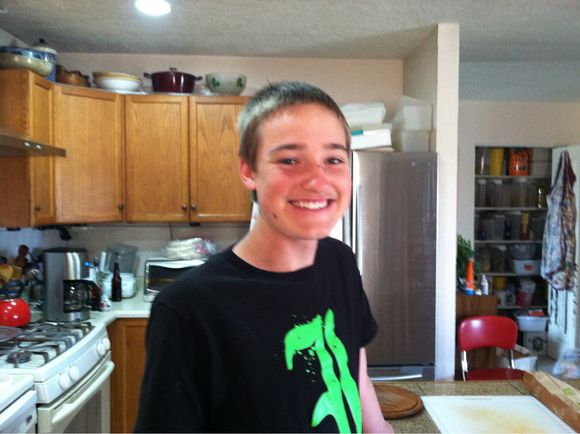 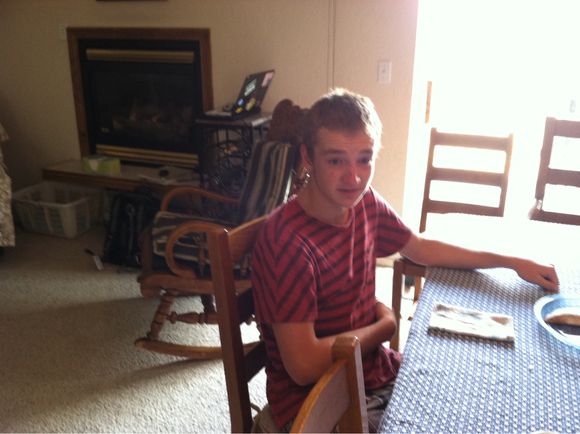 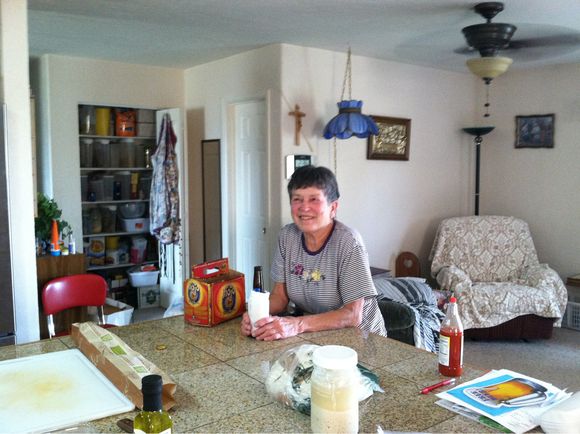 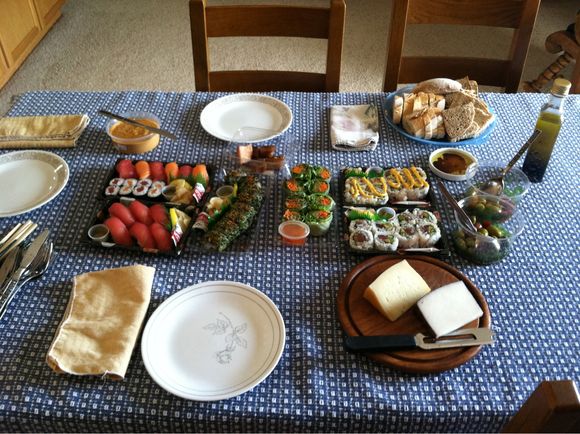 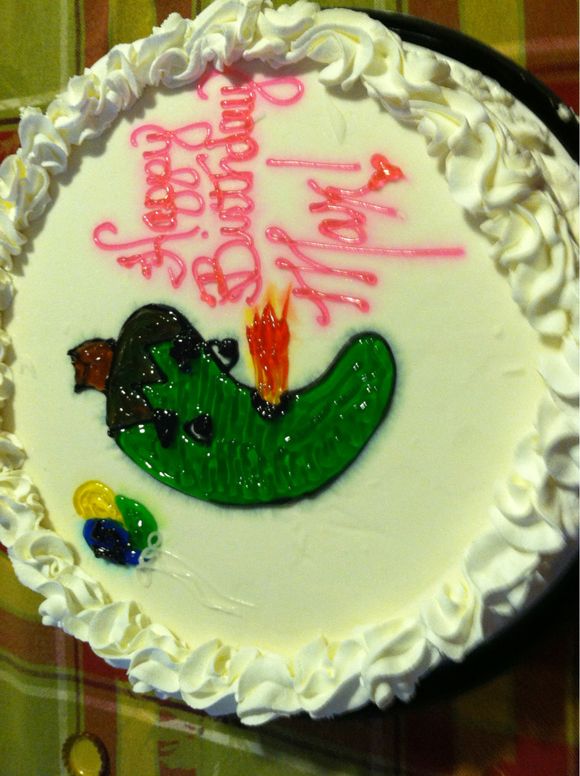 Kelly and John have been renovating their Kitchen for the past 10 weeks.  They have some painting to do but I think that it looks wonderful.  I really like how they opened up the kitchen and main room, making things brighter in the whole room.  Not to mention the shiny new cupboards that do not slam shut.  Kelly said no more slamming drawers when you were mad.

We went to visit them on Sunday after Christmas and here are some photos for you to share. 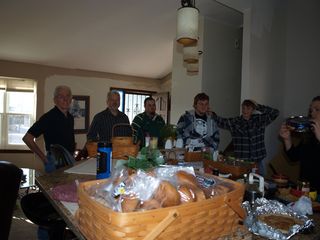 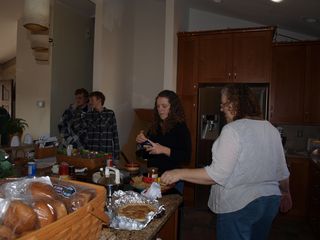 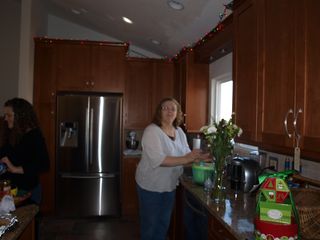 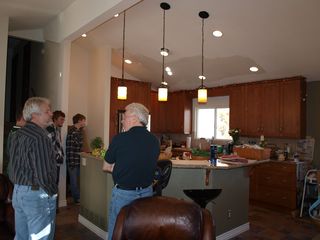 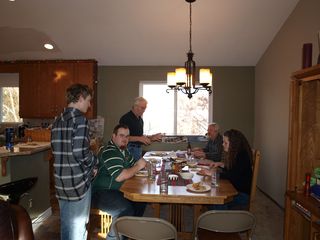 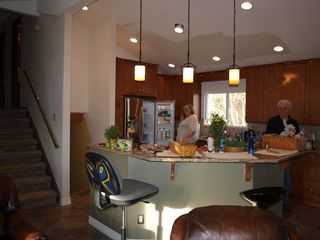 Our homes, not unlike our lives, are constanly being formed.  They change as we do, to be able to accomodate our lives and the happenings of life at that point in time.  I think my home will always be under renovation and formation.  God is not done with me yet.

Somebody, please remind me

"The true daughter of the Institute has no cross to carry, because the Mother takes care to carry the burdens of all."  Theodore Maynard, Too Small A World, (Bruce Publishing: 1945) 66.

Meditation: "In the rules [Mother Cabrini] wrote: 'When they are not able, on account of illness, to attend to all the common practices, the religious should frequently raise their hearts to God, keeping united with Him and offering Him their sufferings without complaint."  Theodore Maynard, Too Small A World, (Bruce Publishing: 1945) 66.

Complaining allows the enemy of the spiritual life a foot hold.

"The moment we cease forming acts of virtue, our inclinations, naturally prone to ease and pleasures of the senses, raise in us disordered appetites which overthrow or at least weaken our virtuous habits. This is to say nothing of the loss, through such neglect, of countless graces which we might have merited by a constant application to our spiritual advancement." Dom Lorenzo Scupoli, The Spiritual Combat (Tan Books:1990), 112.

Resolution:Today I will take the advice of Mother Cabrini and turn to the Mother of Heaven who takes care of my burdens. One time today when tempted to complain, I will turn in prayer to Our Lady who is carrying my burden with me. I will not complain.

Marian Vow: St.  Maximilian Kolbe"[W]e need a great deal of serenity in our approach, much peace and fullest confidence so that we do not needlessly fret!"  Will To Love  (Marytown Press0

I give this resolution to the Blessed Virgin Mary.
Thanks be to God for graces received.
Related sites: Castle of the Immaculate & AirMaria

When Tim lost his ipod I was hoping for some honest person to find it and turn it in.  I was greatly disappointed and felt their were few honest folks left in this world.  When one of the kids lost their phone a few years ago it was returned and I am reminded of that now.  One of the kids lost their wallet and after going through the process of having to call the bank, credit report companies and hours at DMV to get a new drivers license, things got better.  There are honest people still left in this world.  A business owner called to say that she had Ted's wallet with everything still inside.  That is one lucky young man.  A very blessed young man.

Thank you, LORD, for looking after Ted.

Max and Chris' photos are in the album marked Camp St. Peter

middle of the night sheriff call

When the phone rings before 3 AM you answer it as your stomach flips.  The Peublo Coounty Sheriff called this morning.  That would mean Joe.  It was a very scary wait for me with many Hail Mary's and Our Father's prayed while Tim was on the phone with the sheriff.

They found Joe's little car on its side in the parking lot at the school. Joe was not in the car and no where around.  There were no tire marks.  It looked like some one came along and turned the car on its side.  Do we know where Joe is?

We tried his cell, many times.  NO answer.  The campus police went to his room and he was not in his room.  I continued trying his cell.  Then we went to his phone records to find his friends.  Joe's friends got calls at 0330.  I left msgs on 2 of them and woke one young man up.  He said he had seen Joe's car but they did not know where he was either.

Let me tell you I was very relieved when Joe finally called at 0400.  He said he was in his room at the dorm.  What was the matter that I had been calling.  "Your car was found on its side and no one could find you."  I wonder what dorm room they went to or if Joe just did not wake up.

Any way, Joe is safe.  The little car is being towed back to the Springs to our mechanic.  The fluids had leaked out and we are hoping it just needs to be filled again.  I think the only other damage is the side mirror is broke off.

Thank You, LORD, for keeping Joe safe.  Yes, we started our day very early and scared but Joe is safe and that is all that matters.

Have a Peace filled day.